Assam has an enchanting and rich cultural history making it the pride of North East India. It is a land of myths, mysteries, lures and legends. It is one of the most forested States of India. A trip to North East India is incomplete without visiting Assam. It has everything for tourists – from its rare combination of plains, mountains and plateaus to a wide variety of flora and fauna. It is rich in bio-diversity with a number of wildlife preserves.

Considering Assam’s rich history, the city of Sivasagar occupies an important position as most of the major Ahom settlements were located in and around Sivasagar. It has enough preserved heritage to facilitate a heritage walk.

History of this Heritage

Sivasagar, named after its ruler, Shiva Singha is a city of great historical importance in Assam. Situated in the North eastern part of India, the city attracts a lot of tourists every year. It may be called the pride of Assam due to its rich and ancient cultural heritage. Once it was the capital of mighty Ahom kingdom, who ruled Assam for a glorious six hundred years till the arrival of the British in 1826. The town carries the legacy of its past through monuments of Ahom kingdom. Many of these are now preserved as national monuments.

Charaideo (Che-Rai-Doi) roughly means a town on the foothill of the mountains in Tai language. Located 22 kilometers away from Sivsagar town, it was the original capital of Ahom Kings, built by Sukapha, the founder of the Ahom dynasty, in 1253 AD. The place is famous for the numerous “Maidams” or burial vaults (42 crematoriums) of Kings and other members of the royal families. Over the years, many of the maidams have been looted and vandalized. Originally, there were more than 150 of these maidams in this area but only around 30 of them have now been protected by the Archaeological Survey of India.

It is an oval-shaped pavilion from which Ahom royalties watched elephant fights and other sporting events. This wonderful structure is said to be the first amphitheatre and the largest pavilion of Asia used by the rulers of that time. The unique shape of the building is believed to have been inspired by the shape of the Ahom longboats, something that must have served them well in the numerous battles with the Mughals. There are a couple of newly minted dragons atop the entry gate. They used to be the emblem of Ahom Dynasty, and a testimony of its oriental origins. 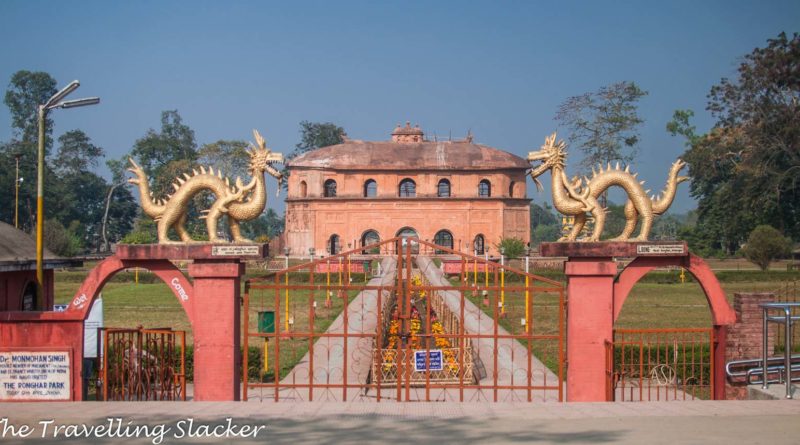 3) The Kareng Ghar or the Talatal Ghar

It is a seven storied palace located 6 kms from Sivasagar Town, considered to be the largest of all Ahom monuments. Three of the floors that are underground are known as Talatalghar and the four floors above the ground are known as Kareng Ghar. It was built by King Rudra Singha (1696-1714).

It has two secret underground tunnels. These tunnels were used as escape route for the rulers in case attack by enemy connecting Dikhow River and Gargaon palace.

One of the important tourist attractions of the place is the beautiful Joyasagar tank. It is said to be the biggest man-made lake in the country, which is spread over 318 acres of water on the edge of the town and on its banks three temples were built in 1698 by King Rudra Singha. The tank was constructed by Swargadeo (the holy king) Rudra Singha on the memory of his mother “Sati Joymoti”, she sacrificed her life for her husband Gadadhar Singha who had absconded himself to save Assam from the cruel ruler, Lora Roja. Joysagar tank is surrounded by five significant temples, namely Vishnu temple, Devi temple, Shiva Temple, Ghanashyam Temple and Joy Doul.

Dedicated to lord Vishnu, this temple was built by Queen Ambika Devi, wife of King Siba Singha in 1734 AD. It is basically a 104 feet tall dome with a mandapa (outdoor hall) leading to the sanctum sanctorum. It is thronged by devotees during the festival of Shivratri. The complex has two more smaller temples, called Vishnudol and Devidol, both following the same structure. All three of them have some intricate sculptures on the walls. Vishnudol was dedicated to the neo-vaishnavite sects while the Devidol catered to the traditional Sakta sects worshipping the goddess.

How To Reach: By Air- Rowriah Airport in Jorhat Town that is 55 kms away, Train- Alightat Simaluguri which is on the outskirts of Sivasagar town.

Tickets: 15 Rs for Indians and 200 Rs for foreigners in most monuments.

16 thoughts on “A Heritage Walk To Remember- SIVASAGAR”

This site uses Akismet to reduce spam. Learn how your comment data is processed.

I have shifted this blog to a new site. Kindly visit. See you there.